“How in the world do you remember those long conjurations?!
I mean that must take ages!”

…When I say I’m a grimoric (traditionalist) magician and go by the book, I mean it. I use the conjurations, like the ones found in the Goetia, and make sure to recite them word for word during my evocations.
I do more than read them from a book when it comes time for the ceremony; I memorize them long in advance, integrating the meaning and flow behind each word, to harmonize with my intentions.

Memorizing the conjurations has some beneficial if not vital advantages for grimoric mages. For one, it keeps the mind and intentions completely in the present; consistent, and harmonious in the flow of the ceremony. The mind can only focus on so many things at once, and even if there is a small portion of it (your thoughts) making sure to pronounce the words correctly, understand what is meant by the Old English which the conjurations are written in, and/or determining if you really believe every word you are speaking while speaking them, at least SOME measure of your will and/or concentration will be fractured. The conjuration will be working against instead of for you if this occurs.

The conjurations as given in the Goetia of the Lemegeton, The Heptameron, or The Key of Solomon are complete in that they cover all the vital parameters and areas where major loopholes could be exploited and use the most powerful names to bind it as a sealing contract. You won’t have to make last minute adjustment or become distracted with wondering if your ad-lib or personally constructed conjuration was complete if you use the given invocations.

Another reason for reciting the conjurations directly as opposed to reading them is direction of will/intention. Think for a moment and remember the last time you heard someone speak to the audience while reading from a book. A couple small town ministers and teachers might still do this as they are not held to the same public speaking standards of more visible individuals. If you are younger, perhaps you can remember the last time you heard a “book report” from a fellow student in class and all they did was read from their paper. There is a disconnection which occurs where the audience no longer feels as if THEY are being spoken to.
This is a sure way to lose the attention and respect of your audience, a very bad idea when your audience is a powerful spirit.

I do not recall many occult books which delve into the subject of training the magical voice. The most I can recall are explanations from various occult authors that go into “vibrating” words of power (Such as in the Golden Dawn, (LBRP, LBRP, MP, OBWT, etc.). The closest thing I have come across lately is Jason Miller’s “The Sorcerers Secrets” where he goes into excellent explanations of how to utilize one’s voice, appearance, presence, and gaze to influence the world and others around them. EVERY, and I mean EVERY magician/will-worker/sorcerer/ whatever should be skilled (at least moderately adept) in these areas if they are worth their mana, no exceptions. If you cannot use your abilities to at least sound confident during a conversation, you have no business trying to persuade a spirit to do anything for you. (I theorize this is a main reason for the many frustrated sociopaths attempting these practices for some hope of power with none to begin with) If you cannot get people to acknowledge you for anything, you are fooling yourself, thinking a spirit will. You will need training in how to bring about your voice that will make the cosmos take notice.
A ceremonial/grimoric magician must be skilled in projecting power/will through their voice (I’m inclined to say every magician should. Period). This has nothing to do at all with “vibrating” words. In practice, they might help you to eventually get your will across, but are not the key in and of themselves. If you’ve read this far and felt your heart sink because you’ve realized your voice is not on the level it should be: confidently/energetically/ magically……
Fear not! Most of the best speakers have had classes and practice, practice, practice. Just like with anything: The MAGIC to become skilled at something is to work your butt off for it. This is something you definitely can get better at, even if you’re a natural.

Magical voice practice as well as conjuration memorization can happen in the same step: Get a tape recorder and record yourself speaking the entire conjuration, word for word. Before this step, I had to write or type out the conjuration, correct some of the spelling, and organize it into sentences and paragraphs. (Many conjurations are one big run-on sentence)

There is no reason to shout or vibrate unless you absolutely need to do so for the “barbarous names”. Put as much intention as you can into your practice. When I was doing this exercise for the invocation in the Goetia, I would omit the spirit’s name for fear of drawing its attention at a time I was not ready. It felt like a good idea since the practice made the invocation quite powerful. The atmosphere would become eerily still when I got going.

When you are done recording, listen to the entire thing as often as you can. Go to sleep while listening to it, implant it in the deepest reaches of your unconscious. If you’re like me, you’ll begin picking up sections of the conjuration quickly, memorizing more and more each time. Be patient, and listen to your recording as often as possible, saying the words in your mind or aloud while listening. A neat thing about this exercise is that you are doing more than memorization here. With every recitation, you are integrating the meaning of the words within your psyche and will. Bit by bit, it becomes yours by the apprehension of the invocation, and not just something from a book. You start to realize that the invocation covers very specific parameters as a matter of binding and contract. The spirit is under the terms of the ceremony to fulfill its end of the bargain without any tricks or deceptions. They are designed with specific intent and purpose, tying them with the most potent of names.

Make the recitation of the holy/barbarous names with as much reverence and power as you can muster. Speak them as you would a prayer of invocation. The more you recite in this manner, the stronger the words will become for you.

If you follow this example, you may find that your flow and speaking improve in such a degree that you will want to re-record over your original attempt. Try recording the conjurations again, and you’ll notice how much you’ve improved…notice where your voice sounds strongest. Are there any points where you hit a snag or can tell where you’ve broken concentration? Do you sound like you are confident in what you are saying? If you were an objective listener, does the speaker sound like they believe what they are saying? Do they sound powerful? Authoritative? Certain? All these descriptions are elements you should be striving for.

Beyond getting a spirit to appear, these practices will cause your day today “words” will have more power, more intention. People will listen and take better notice of what you say and how you say it. This formula is the magical instruction given by spirits as “eloquence” and “rhetoric”. If you still have difficulty, seriously consider taking a speech or public speaking class in college or wherever you are able. Find topics to speak on publicly. Experiment with friends and family members, vying to prompt reactions which you intend.

My original exposure to these concepts and to magic itself was through the realm of hypnosis. I have been hypnotizing people since I was 14 years old and have explored the capabilities and possibilities of hypnosis for many years. Trained hypnotists/ hypnotherapists utilize an area of magic no matter what they, or the scientists say. The fluctuation of intention through sound/voice and intention are the very factors one uses to propel their -will- through space. A spell, a chant, invocation, or evocations are all done through intentions expressed through “the word”.

“In the Beginning was the WORD”

Hypnosis is a fantastic practice because you get to see instantaneous results on how your voice affects another human being. Further exploration of “the voice” can be explored through the study of music and song which is by far one of the most powerful and influential creations ever designed by mankind.

For now, let us stay within the areas of evocation and the magical voice’s use for spirit contact.
Often, speaking to a being that is initially invisible can be challenging. A respected magician and colleague in the field of Goetic evocation is John King. He describes this initial difficulty of “speaking to a being, who at first is not apparent” as a matter of willed intention. If you are interested in Goetic evocation as it is given in the Lemegeton (and have not done so already), I encourage you to purchase his book, IMPERIAL ARTS. It will help the aspiring magician to ascertain the experience of real evocation from someone who has apparently done so quite successfully.

The spirit you are evoking must be spoken to directly. Not spoken at, or spoken about. (Remember the kid giving his book report) There are huge differences between these actions. Don’t assume the “spirit will know what you mean”. The spirit must acknowledge they are being spoken to directly and that the entirety of the evocation is directed at them. This is done intentionally and energetically. Your words, focus, intention, and purpose are all focused on the spirit.

…Now imagine, you have the conjurations not only memorized, but actualized in their innermost meaning and intention, within you. You’ve heard them and read them so many times you know them like your own name. When you perform your ceremony, you speak the age old words fluidly and powerfully. You know EXACTLY what you are saying and WHY you are saying them. Backed by the cohesiveness of tradition and ceremony, you speak each word to the spirit directly and filled with proper intention….. 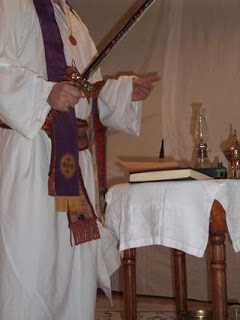 Now… You almost don’t need to imagine what would occur ….if you accept there is a being out there, whose name you evoked to appear with the intensity described above, if the being is there, by the names, and by the art, it will appear.

Since you have trained your voice, you will not be disarmed by the actual appearance of the spirit but be able to continually and skillfully communicate with an authoritative voice.

Be it that a magician if not a man…is only good as his word…..What worlds could be created with that which you utter?