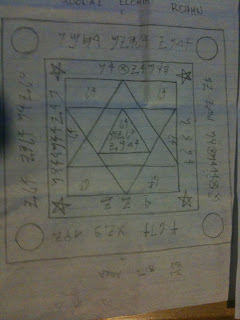 I have been working with the Almadel system for almost a solid year now. Granted, I missed a handful of Sundays for this or that reason, and sometimes the operations failed where nothing appeared, but by far, most Sunday mornings have been involved in becoming acquainted and familiar with the beings described in the fourth book of the Lemegeton. To be honest, I have never before had such consistent and timely interaction with any spiritual beings in all my life. With the ease and methodology of the system, I can see myself continuing in this practice for a great many years, so long as the beings are still willing to appear and converse.

I haven’t posted my latest experiences and not sure if I will or of how much value they would be to anyone. I will say this though, last Sunday evening while I was in bed, I spoke (prayed) to the Gediel, the angel I had been working with over the last few Sundays, and asked if I could be instructed during my dreams that evening.

I was quite exhausted and sleep came quickly. I found myself in a fairly lucid state where I was aware of being asleep. I think I fell asleep remembering (visualizing) the angel’s face and how it appeared and spoke with me earlier that morning. My last thoughts were marveling that I could recall and see his face so clearly, in my mind. There seemed to be no defining moments between the time I prayed, visualized the angel’s face, fell asleep, and began hearing his voice as I saw myself in some sort of purplish-crimson cloudscape. The entire episode seemed to go on for a while in which the angel spoke plainly about the paradoxical nature of mankind’s attempts to grasp (more like clutch) at the spiritual. Much of what was said was about simple but direct reconnection. – Appreciating our place in the cosmos without the endless coloration of cultural and anthropomorphic attachments to what we make the spiritual to be about. I recall everything he said clearly, but find it difficult to relate (type) back into words. I was, once again, in that state of -no argument or questions, just –being-…”remembering” perhaps how the illusions and defining points are temporary constructs of the mind, that’s all. The angel’s appearance and presence was quite deified but as a matter of course, standing near to me but often looking ahead as he spoke.

There were no foreign and shocking words of wisdom passed, just truths about living most of us seem to know but like to distract ourselves from. The final words the Angel spoke were about dreams as use in a metaphor. He said dreams are sometimes intense and meaningful for people just like the one I was having, but that after waking, they fade from their original splendor (the concentrated form of the meaning and impact of the experience). After waking and setting our minds to the habitual workings of the day, the feelings, memories, and revelations fade from all previous matters. Many people go through the cyclical seeking out of new or renewed revelations to try and hold on to. He pointed to such things as being beneficial only for the further desire to return to simple matters of truth.
I had a sudden euphoria of divine singularity and awareness, that ultimate point I had felt I had reached more than once before,…. then is passed. I thought: “There is humor in this, sadness, and joy, a perfect, humbling, mix of indefinable certainties.” The experience concluded as swiftly as it began.
The rest of that night my mind drifted through thought after thought of interconnecting questions. I did not sleep deeply the entire night and rather stayed in that in-between dozing state of deep contemplation. Upon “waking”, showering and heading to work, it was still a sharp memory.. but only a memory.

The lesson seemed to be about “thought”, the spiritual and material world, and the nature of reality itself, ….all rolled into one concept. As if designed by intention, the spiritual world is immeasurable and quite indefinable, forcing many to experience it in a fragmentary sense and then apply it to their daily lives. These glimpses are enough for most seekers and magicians, for it encourages us to delve deeper and resume our climb on a continually rotating ladder. My experience was deeply moving for me but not necessarily thought provoking for anyone else.

I sometimes forget that my current practice of magic came after years of struggle and searching, exploration a variety of paths, religions, and philosophies. The prompt of my becoming a seeker came from more disturbing rather than enlightening experiences of the unknown. My current pursuits were definitely not the initiatory endeavors of getting my young(er) life in order. Those years were essential though as I grew my knowledge base and garnered a plethora of experiences and lessons.

For the select few who have found enlightenment and personal mastery through the paths of magic, each has gone about their own way of experiencing self actualized spirituality. That is to say, their personal involvement in spiritual matters through experience and practice has led them to their current state of awareness and belief. (if not a specified path or faith). Current examples I’ve come across lately are like those the ending chapters of Joe Lisiewski’s “Howlings from the Pitt” and select other which bring the magician full circle to the original ‘point’ of living. You’ll see the evidence of this when the seeker reaches a point of non argument and complaining: A cessation of internal conflict which mirrors their interactions with the world. (Difficult for many of us) That is to say, challenges never cease, but personal actualization has reached a state where there is inherent “oneness” in all things and life and we no longer feel a need to “press a cause”.

I was reflecting on this the other night as my wife and I watched “PEACFUL WARRIOR”. A movie based off Dan Millman’s “Way of the Peaceful Warrior” a book that changes lives. I first read this book when I was a junior in high school. It indeed, changed my life and became a catalyst for living my life differently from that point on. Since that initial reading, I must have read it, and the following books, a handful of times. My later explorations into mysticism and magick were built on the foundations of Eastern mystical insights and modern applications. Far from the off-shot “New Age” trend, it was the few books who give it strait and sure without any fluffy tangents of fanciful intrigue.

When asked on advice about successful and purposeful living I typically will NOT direct people toward a book of magic. I’ve seen magic for many, and even for myself at times, become a distraction from dealing with one’s self and the world. Its pursuit can be a hindrance when it becomes a substitute for personal transcendence.

Instead, I suggest works like “The Way of the Owl” by Frank Rivers, “Way of the Peaceful Warrior” by Dan Millman, or “The Laws of Spirit” also by Dan Millman. These are just three works of a multitude of exquisite works which I have read. The reasons why I personally keep referring back to these and also suggest them to others, is that they are written for the Western mind. There are Eastern concepts and philosophies yes, but ones congruent to our mentalities and culture. On further reflection, the philosophies cannot even be classified by “Eastern” and “Western” as they are found in philosophical and religious works from multiple sources, cultures, and touch on the condition of all modern peoples. Other people may have found other books more insightful but I continue to return to these three works…possibly because they had such a personal and moving impact on me. Also, for each sequential reading, I have not found any of the statements or philosophies to be any less true or profound. They are truly “laws” one can base their life on and never go wrong under any circumstance, a very difficult thing to truly state in any day and age. You’ll find me reading from “Way of the Owl” to my students now and then in Martial arts class, just as my Sensei in Aikido did for me.

Magic, as an inherited or acquired skill is filtered through the developing will and awareness of the magician. In its deeper practice, it should trigger keen introspection, mystical experience, and revelation. Successful, continued, practice of magic can be determined by the spiritual maturity (mysticism) of the magician and to what end they utilize their gifts in service to others. You can almost gauge the degree of successful practitioners by those who have reached this point and continue to expand their grace to others. (This does not signify that they are all celebrity gurus, authors, or charismatic speakers either)

The point in my posted musing is how my own efforts are no “ends”, just pursuits of arts I love and strive to excel in. Whether are or these arts lead me to be existentially wealthy or poor, dignified or unappreciated, extravagant, or common, dynamic, or subtle….. If I continue to live in which each moment has meaning, I will have fulfilled my purpose.

My own council while writing this has been: “Just because I have seen and conversed with powerful beings of the celestial host, had profound and intensely exhilarating magical experiences, many will not….. yet these people may still arrive at the same enlightenment that I seek.”