It’s strange…. Attachments to anything be they people, places, ideals, or circumstances will eventually lead to some measure of pain or “suffering”. The great paradox of humanity being the realization that the only two constants are conflict and change; ironically two concepts human beings seem to have the most difficulty with.

As many of you may have read previously, I am in the process of moving. All basic physical concerns are looking forward to the move and getting to appreciate new appliances with working fixtures and water pressure..

The sentimentality that brings up any measure of discomfort is the memories and workings I’ve had in this place. Some of my biggest magical breakthroughs were in the magical room which is still not completely deconstructed energetically although everything is packed away in boxes. …..

– Although I’ve cleared out the basic wards and perimeter seals, I noticed that the first people coming to look at the house didn’t enter the room but viewed it from the threshold….

The room still carries the same feel and I wonder if the sensations will linger even after we leave.
Intense presences of the mightiest Archangels were fully present within those walls. Beings which I never thought I would interact with on that magnitude arrived in intense display.

… Their imprint always remains to the point where any steno to sleep or linger in that room beyond magical operation were frequented by constant sensations, lights, sounds, whispers, etc. … I truly wonder what new tenants will experience once we have completely vacated….

I look forward to construction my new temple and magical room and continuing my work. I cannot help but appreciate and find affection for the many years of unparalleled experience conducted within a hidden room, in a house next to the woods and creek…

The picture below is an oil pastel I did in High School which I dug up this weekend during the move. Needless to say my interests and preoccupations have remained consistent through the years… 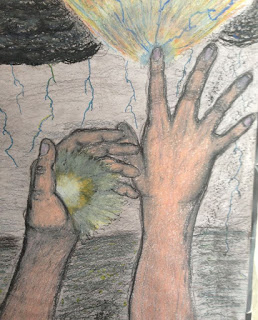 Approximately after eighteen hours strait of moving I could say I was officially a home owner. Friends, family, and students helped transport the collected sum of what was collected after living in the same place for ten years. By 1:45am, there was no energy left to find the location of our toothbrushes, let alone set up the wards and give the new house a proper blessing and spiritual securities. It had also been a while since I was that exhausted, yet spiritual activities would not let me rest even one night… 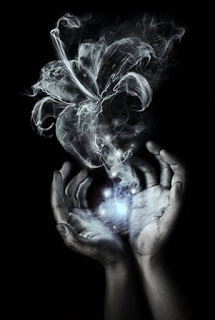 Nothing was strongly sensed in the new house during the initial inspections. Actually out of the lot my family and I had looked at, this one felt the most calm and inviting. My senses had warned me of presences in one or two of the other seventy some houses we looked at before settling on our new home, but no such alarms were triggered in my new home.

However after that first day of moving in we didn’t get to bed till around 1:45am. Despite the long and exhausting day, neither my wife or I or I could sleep at all that first night…..I’m sure at least of that could be attributed to moving into a new house, etc, etc…but….my senses kept going off, keeping me from falling asleep completely. Around 3 am we began hearing door knobs rattle, indistinguishable noises, the sense that another being was there, etc. My physical check of the house gave me a very clear sense of something there where before nothing was noticed as if it was awakened or disturbed by our moving in. My wife had me close one of the closets because she kept seeing a deep darkness exude from it that immediately made her felt uneasy…….obvious signs something was going on… Although irritating and unsettling, such occurrences where far from foreign to me. Although none of us slept much that first night I figured I could remedy the situation the following day.

The next evening while I was away teaching class, the activity apparently continued. I returned home feeling even more tired than before, with the lack of sleep and mustering the extra energy needed to teach class. My wife immediately reported to me what had occurred while I was away and that I needed to take care of things before doing anything else happened. She stated that as soon as I left she felt unease, obviously remembering the night before and that I hadn’t cleared out anything yet. She kept hearing the odd noises and seeing things out of the corner of her eye. My son was on the couch watching a movie when my wife overheard him arguing with someone apparently changing the movie he was watching by having the game screen go from the movie to the home page and them having the disk tray open with the controller on the opposite end of the room. After that, apparently a couple doors slammed a few times and odd noises were continually heard. My wife was not at all happy since she is now much more sensitive and aware to such things after living with me for a number of years.

After my son was put to bed and despite my exhausted state, I took out my longest held and used implement of aggressive-spirit-negotiation, a broadsword simply called ‘Spirit’ and went to work. All of my other magical equipment and gear is still packed away in chests and boxes and my magical working room will be one of the lasts to be set up. I wasn’t concerned however as I had everything I needed to dispel any agitated presences.

I try not to get into the habit of threatening or banishing all spirits I come across, even those which seem to find me or my family disagreeable. However, any place I live needs to be cleared for comfort and workability regardless, and anything bothering myself or family simply will not do.

The presence was not very subtle and appeared as soon as I had the living room to myself and extended my senses beyond the physical layout. A gray expanse brought forth an angry looking being that was only vaguely human looking. It appeared as some skinny…oddly elongated form with most of its defining features whitewashed away. My intuition told me that the it got “stirred up” or awoke once we moved all the stuff in….. I seriously can’t say if it was a ‘spirit of the house’ or something that just lingered near to there that got drawn in…..regardless…it seemed to have some issue with us being there.
. ….I was drawn into this really deep state by standing in the room and extending my “roots” through the foundation and basically trying to feel out the entire house by extension…This odd being came directly in front of me expressing that it was quite angry that we had moved in, and brought “all this stuff” with us. I responded that this was now my abode and would have no harmful actions toward us, or disturbances that would frighten anyone. When I was unmoved by its responses of dislike, it darted around and became less stable while arguing with my statements of intent. I became a bit stern at this point, sending out my own energy … much of this is to explain since it happened astrally, like the event was happening in a wide, gray, space in the house but felt like I was somewhere else…. anyway aspects of the MP and LBRP…standard CM cleansing rituals were performed in a sense but with other highlights since neither I or the elongated entity seemed to be communicating well…..
When my mind snaps into the purely magical state of working I’m able to see and direct things very clearly. There is no ambiguity to my gestures or intent and my conscious rational takes a heavy backseat to my intuitive workings. I moved through the house, seeing little of the walls, fixtures, and boxes, and instead the colored lights and strands of energy as I pushed through unseen thresholds and stagnated pockets of astral dust. Even trying to write my workings in a cohesive, understandable way becomes

Also some newer sort workings were conducted rather spontaneously if not intuitively. I meditated in the lower center of the house…drawing down positive light in through inhaling, trying to fill my body up. It felt like it was shining through my pores. I’ve practiced this technique often through Reijiho but not to this degree or purpose before. After I literally felt I was filled to capacity with this divine and powerful light, I put my hands on the floor and exhaled sharply seeing the light spread down throughout the entire foundation, and emerge to encapsulate the house and property a shell. I did this three times, each increasing with power and intensity. I took the remaining energy I had and went to all the rooms, doors, etc and drew out my wards and symbols in front of them……

Anyhow…everyone is sleeping well the past two nights since then ….. my only issue has been myself getting ridiculously frustrated trying to do basic house work and instillation of appliances.

Being a wizard in today’s world is paradoxical to say the least . Perhaps it has always been that way to some degree. It can be challenging enough just dealing with the mundane demands of life and change. Perhaps when we are all moved and settled and my room is arranged I can try to descry the identity and purpose of the elongated entity.